In her new piece Through Touches Saskia Hölbling deals with the power of touch. The touches take place subversively at the beginning, then gradually escalating – without any purpose, without reservations, unintentionally, but urging for more.

Three people meet on an empty white surface. Like blank page, nothing stands in their way. In the absence of things or other distractions, they begin to show themselves, to engage with each other and to become involved with each other.

Dance of the Touch
In a fragile dance of touch, they create an intimate space for themselves that makes their bodies permeable and enables them to make the other’s impulses their own and vice versa. To read one another.

Being in the Other
Cautiously to hastily, they try one another out, body to body, body to body – tender and demanding, awkward and devotedly, feet on stomach, face in armpit, arm around knee.
The bodies immerse themselves in one another as if the skin holds the secret of access to the other. As if this would open the door to an unprecedented form of encounter.

Reconnecting
“Touching or meeting people can neither be clicked on nor wiped away, they are individually completely different and therefore very special.
“But it takes time to get involved with the other, to pause and listen. In the rehearsals we gave ourselves this time and it was incredibly nice to see how unorthodox, bizarre and absurd some reactions to the other turn out, but there was never a moment too much, or too strange, or too embarrassing, and this is originally connected with ‘getting involved with the other’. What an omnipresent utopia in global times,” says Hölbling about the approach to her current work.

A DANS.KIAS production
In co-production with WUK performing arts.
With the support of the Cultural Department of the City of Vienna, the Austrian Ministry for Arts and Culture. 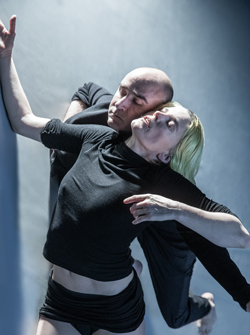