“This opens a new universe”

On the 25th anniversary of Dans.Kias, Saskia Hölbling is amazed at how much she has created – and that she has held out.

It’s been a long time since Saskia Hölbling – then just 20 years old – irritated her parents by informing them that she would give up studying biochemistry and molecular microbiology in order to learn dance and become a choreographer. Contemporary dance was still a very exotic subject, the Vienna Conservatory was the only training centre in Austria that could offer such a course. Although she had never attended a ballet or dance school, Hölbling was determined to become a choreographer.

The idea came from a performance by the Serapion Theatre and workshops at the Homunculus Dance Theatre. “I was fascinated by what theatre can be like: completely without words.” She went her own way, and even founded her own company with Dans.Kias. That was 25 years ago. “It’s amazing. You’re always so in the midst of things that, unless you have an anniversary, you don’t realise how long you’ve been working.”
Or how much.

On the occasion of the anniversary, she counted how many premieres she has choreographed in these two and a half decades: she came up with 40 – with two or three exceptions, all full-length programmes. This was also made possible by the fact that – more or less of necessity – she also looked around internationally during her training.

“I quickly found out that studying in Vienna alone would not be enough for what I wanted to do – namely choreograph pieces,” says Hölbling. And that is how she came to Anne Teresa De Keersmaeker’s now world-famous P.A.R.T.S. training school, which was only just being established at the time. “A universe opened up for me,” enthuses Hölbling. “I had been playing the flute for nine years before that, for example, and very often had already gone through the teaching of form and all the theoretical background, but through Georges-Elie Octors of the Ictus Ensemble and Fernand Schirren, the rhythm teacher at the Mudra School, my eyes really opened.”

At P.A.R.T.S. she learned contemporary ballet and dance techniques such as Release or those of Merce Cunningham and Pina Bausch. That was all “very exciting”. Nevertheless, she travelled to Vienna every weekend in parallel to this training, because she already had her company at the time.

“Never wanted to be a dancer.” What actually made her so brave as to start her own company? “I asked myself the same question. Why did it happen? I was already logged in with biochemistry. And then there was this fascination for non-verbal theatre – with that I dived into the body world of dance. But I never wanted to dance to be a dancer. I wanted to make pieces.” And as much as she liked it in Brussels, where the possibilities in contemporary dance were much more extensive, she did want to return to Vienna. “Then I just did it.”

There was also a sense of a new beginning here. “In Vienna there was not so much going on yet. There was a lot to build up here.” The scene put pressure on - and the Tanzquartier was founded. “I had just returned from Brussels and made Do your desires still burn? – that was my international breakthrough. Shortly after that the Tanzquartier was opened and Sigrid Gareis invited me to open.”

At the latest since then, she was also known on the Viennese scene. “25 years is a long and fruitful time – still. But what I had already noticed is that it is not so easy to hold your own in this city for such a long time,” says Hölbling. Just in the anniversary year, Dans.Kias dropped out of the two-year grant from the City of Vienna, which is so important for freelance artists. “We did receive project funding, but not the amount we had applied for. So this year we have to tighten our belts like never before. Because in contemporary dance it is practically impossible to find sponsors. And you can’t live on ticket sales either.

“If even a musical in the city of Vienna cannot survive on ticket sales alone, one can imagine that contemporary dance can’t.” It is “cynical” that the funding for her and her troupe is now being cut: “We have an anniversary. We’ve had a lot of positive media response recently. We have asserted ourselves independently in the city. We take a clear stand – it’s not necessarily mainstream, but we are developing further. And then the curators say: Now we have to look at the next piece to decide how to proceed. That makes me feel frozen.”

Space for touch. Her new piece, Through Touches (performances were planned for the beginning of April but had to be cancelled), is part of a cycle that began with Corps à corps (2016) and also includes Corps suspendus (2017) and Things (2018). Through Touches, that is “again a new universe that opens up”, says Hölbling. “It’s about one thing that is omnipresent: touch. That’s a hand that’s laid on. But a touch can also come about through a look. If you allow space and time to really engage with each other, then you can meet one another again.” She had “a total desire” to dance along, but then took herself out. “I hope to do it in the next piece.” 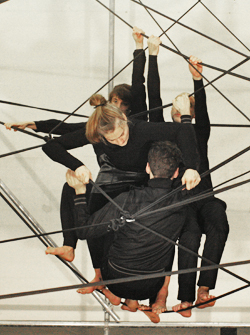