After participating in the most varied artistic exchange and research programmes with the emphasis on improvisation she began working on her own improvisational works: “SHE HAD NOTHING TO SAY”, “hit lost and found”, “One some body thing” and “1975” (selection).

As part of this process she confronted the term “honesty” in relation to the body and to the audience. She worked on surrendering herself to the “unknown”, having nothing to fall back on apart from herself and the particular moment, and in search of a deeper understanding of honesty she also explored failure, insecurity and judgement.
Currently she is cooperating with artists from various fields, questioning performance formats and deepening her understanding of the body through various different artistic practices and experiments, repeatedly finding new opportunities to create a connection between herself and the audience. 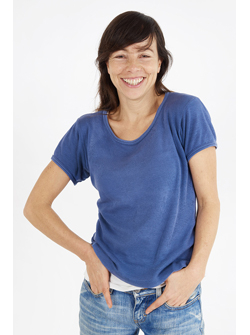