IN FRAME OF THE 20TH ANNIVERSARY
DANS.KIAS PRESENTS FROM 18 UNTIL 20 JUNE 2015
THE "SQUATTING PROJECTS"

"Here the claustrophobia of our existence is most radically revealed: as bodies that are now only the debris of the systems that govern them."
(Der Standard)

„Brilliant: the dance piece by by Saskia Hölbling and Laurent Goldring
Our society is a permanent building site. One that is permeated with fences and secured by bars. With their oppressive dance work "bodies (with)in fences", the Austrian choreographer Saskia Hölbling and the French artist and philosopher show exactly what this policy of blocking feels like.
The first piece "body in a metal structure" has already been a success. The new one has now scored a bull’s-eye."
(Der Standard)

“An exciting performance in its difficulty and physical commitment“
(tanz.at)

"body in a metal structure"

"A fascinating performance: Smoothly, the body glides through the labyrinth of the artistic architecture" (tanz.at)

"The symbolic value of it all is considerable. The philosopher Martin
Heidegger was impressed with the idea of the “Ge-stell” (frame). For Hölbling this work is the first statement in a whole series of future “squattings” of public places. A start has been made – and very successfully." (Der Standard)

"It is exciting to observe what takes place between the dangerously swaying individual components and the fixed inner construction, and how the conquest of this meters-high object is designed." (Kronenzeitung) 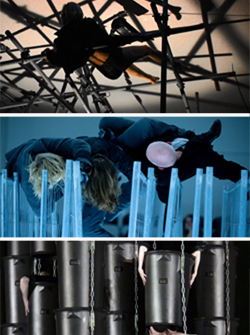