Since 2002 Saskia Hölbling has concerned herself intensively with the forms of presentations of bodies that evade linear interpretation –  in group formations as well as in solos. Which leads a critic to the following lines: “This anti-Barbie-Doll calls for a reinvention of the viewpoint . . . breaks with all conventions, with a cold, beautiful power full of silent intelligence as well as aggressive physicality.”

“I am starting from the utopia of the possibility that our bodies can be changed according to how we conceive them; from body conceptions that understand the body as a kind of mass of ideas that can assume any manifestation, even any form of being. Where an elbow takes decisions as much as a calf or a head. Not holding on, no insistence on an idea. Always in the flow of associations or the articulation of the body.
“What would I like to achieve by this?  An opening up of stereotype worlds of imagination, a sensitisation to in-between spaces and external fields, into which everybody is capable of diffusing. And I would like to encourage people to use the freedom of the performance.”

In 2000 she received the Prix d’Auteur du Conseil Général de Seine-Saint Denis/Bagnolet for “Do your desires still burn”, and in 2002 she was awarded the Austrian Dance Production Prize for “other feature”.

Besides her own choreographies Hölbling has worked repeatedly with other artists. For example, together with Canadian choreographer Benoît Lachambre and French video artist Laurent Goldring she created the solo “rrr… (reading, readings, reading)” that was presented at the opening of Tanzquartier Wien in 2001. In May 2008 she created the duo “fiction in between” together with French choreographer and dancer Fabrice Ramalingom.

Saskia Hölbling has also created choreographies to existing music e.g. by Claudio Monteverdi, Luciano Berio and Wolfgang Mitterer. In 2009 she directed a drama for the first time: together with students of the Max Reinhardt Seminar she produced “Die Hamletmaschine” by Heiner Müller. After her latest production, “pictographic events”, in December 2010 Hölbling appeared in “parades & changes, replay in expansion” by Anne Collod in 2011, a re-enactment of Anna Halprin’s “Parades & Changes” (1965).

From 2011 until 2013 Hölbling developed together with Laurent Goldring the trilogy "Squatting Projects". Followed by the solo work "Assemblage humain" in 2015 and the group piece "Corps à corps" in 2016. And in 2017 Saskia presented "Corps suspendus". Currently Saskia works on her next piece "THINGS". 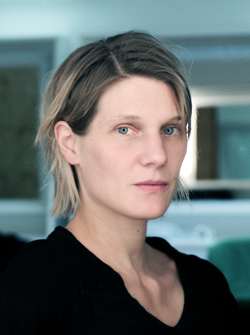